The Sub-Culture of Complainers 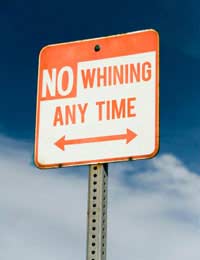 Complaining not only has the power to right wrongs but also instil accomplishment and summon up the odd bonus. It’s not surprising therefore that a subculture has taken it up as a hobby.

There will always be people who enjoy complaining for the sake of complaining. Those who take perverse delight in, for example, watching television programmes and adverts in the hope of finding something morally wrong so they can complain to Ofcom.

But there is an alternative breed of complainants who know exactly what they want. Aware of the power the consumer now holds and the great rewards on offer to the complainant, this consumer subculture have found a hole in the complaints system that can be readily exploited.

In this fiercely competitive marketplace, companies are all too keen to keep their customers happy and loyal and as a result complainants are treated with greater respect than ever.

This subculture is at odds with most of British society in that they do not shamed by their constant protests and claims but enjoy and are inspired by it.

But this is not to say that hobby complainants simply just enjoy stirring up trouble and taking what they can get, although there are some like this. Many have a strong social conscience and are of the attitude that the British public are routinely taken advantage of. Complaining is therefore one way the consumer can help to readdress the balance.

The real key to the hobby complainant’s mindset is they know that, contrary to popular belief, complaining can be a very positive action.

The Positive Action of the Complaint

A consumer might, for example, write a formal letter to the manager of a supermarket complaining about the unacceptable service and suggesting how it can be improved.

The manager duly looks into the problem and finds the customer’s comments are justified and takes the appropriate action to improve the service. The result is that the supermarket runs more efficiently, and so the business and all its customers benefit from the upturn. The complainant is rewarded with a letter of thanks and money vouchers for the store.

This is the ideal of course, and reality often veers from this template, but it does highlight positive side to complaining. The complainant in this instance has not only improved a public service, and been rewarded, but they have not lost anything by doing so – they have actually come away better off.

Coming Away Better Off

This is what marks hobby complainants out from the reluctant masses. Most people complain to get back what they’ve lost; a refund for a defective item, a replacement for item sent in error for example. The aim of a serious complainant is not only to redress the balance but to come away better off – whether it’s improving a service for the benefit of everyone or receiving compensatory or ‘sweetening’ rewards.

Another good example is the train delay, a popular grievance for many UK residents. A passenger buys a train passage from Manchester Piccadilly to Southampton. The journey proves to be an unpleasant experience. The train not only accumulates a 3-hour delay along its 4-hour plus route but it is also overcrowded and many passengers are forced to stand.

Most of the passengers would not think seriously about complaining. It involves too much effort for probably too little reward, and what’s more, however irritating the journey, the train did get them to their destination in the end. However, a hobby complainant would find this situation impossible to ignore.

They would write to the train operator complaining about the journey, detailing all the appropriate times and stressing the distress and inconvenience the poor service caused. They would also finish the letter by stating how they would not travelling with said operator again - an Achilles heel for most organisations.

The customer service department might respond with a personal and apologetic letter and try to restore the complainant’s faith in their service by enclosing money off vouchers and sometimes even a first class rail ticket to anywhere in the UK.

This one example highlights how the complainant benefits in all fields. Most of the passengers have missed a glaring opportunity to stand up for their rights to decent services because they reached their destination. The complainant, on the other hand, has not only reached their destination, but expressed their unwillingness to put up with poor service and been amply rewarded for doing so.