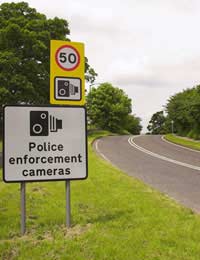 In the UK, you can be caught speeding in two different ways; by speed camera or by a policeman holding a speed gun at the roadside. If you get caught, you are hit with a fine and three penalty points on your license, unless you are ‘lucky’ enough to get a Speed Awareness Course in place of the points.

Traffic offences require a Notice of Intending Prosecution (NIP), which must be sent to the registered keeper of the vehicle. The NIP must arrive within 14 days of the offence to prosecute. If you think you have been ‘flashed’ and it is passed the 14 days then you are likely to be clear. If however you are stopped on the road a police officer, they can give you a verbal NIP and that is sufficient.

When deciding whether to take the matter to court, the prosecution only need prove that you were speeding. There are no such defences as you didn’t realise you were speeding, that speeding wasn’t your intention, or you were only a little over the speeding limit.

The first step is for the registered keeper of the vehicle to send the section 172 notice back within 28 days identifying the driver. This is a legal requirement whether disputing the offence or not, under Section 172 Road Traffic Act 1988.

Afterwards, you may receive a conditional offer of Fixed Penalty Notice for a fine and 3 licence points. You may wish to write an informal letter of Appeal to the address on the notice at this stage as they are accepted in some circumstances. Detail the reason why you should not be liable for the fine. You can also check your local police stations guidelines for this.

If the police issue no official appeals option or in the event that they reject your informal appeal, then you will have to choose whether to accept the fine or dispute the ticket formally. To do this, you'll need to request a court hearing by completing the relevant section of the Fixed Penalty Notice, and attach a statement of mitigation. Send this to the address on the 'request court hearing' slip and you will receive a summons. Before you do this, you need to understand your chances of winning your speeding case, and the possible consequences of losing it.

Contesting a Speeding Fine in Court

It is advisable to seek advice from a motoring law solicitor who can help weigh up your chances of success. When you receive your summons to court, you’ll also receive a Plea and Mitigation form to complete and return before the hearing date. You can either choose to plead guilty but with mitigating circumstances (this can sometimes be done on paper out of court if you don’t face disqualification from driving) or plead not guilty. If you plead not guilty, you will give your plea at the first hearing and be asked if you wish to call any witness at trial. You’ll be given a new hearing date and time to set out your defence with your solicitor.

You can request the police’s evidence against you before the hearing which can then help you to build a defence for your case. Examples of requiring evidence are if you believe the police have misidentified the vehicle or have got an incorrect speed, or if you cannot remember who was driving.

When at court, the prosecution have to prove that you were driving the vehicle and that you committed the alleged offence i.e. that you were speeding.

If you are found not guilty, that is the end of the matter and you are free to leave. If however, you are found guilty of the offence, there is a chance that the fine and penalty points may be increased. Magistrates have the power to impose a fine of up to £1,000 (or £2,500 if you were speeding on the motorway), between 3 and 6 penalty points on your driving license, and a possible disqualification if you were driving more than 30mph over the speed limit.

For advice on fighting a speeding ticket, contact a motoring law specialist solicitor.