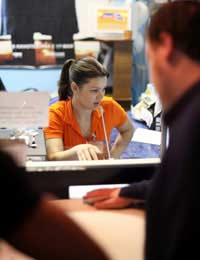 Making a complaint face to face is the most simple and direct way of addressing a problem and if approached in the correct manner then it is also the most successful.

If it’s appropriate, then complaining in person should be the first step in resolving a dispute. There is no use sitting down to carefully compose a brilliant letter and waiting on tenterhooks for a response, if the complaint can be sorted out then and there.

With a telephone call it is easier for someone to shirk their responsibilities; they might forward the call on to another department or promise a call back. It is also easier to be curt and even rude to a caller they can’t see.

A letter or an email is even less direct and confrontational and allows the addressee the opportunity of responding with the standard template letter brush off.

But if somebody complains face to face they are much harder to ignore, and demand to be treated like a fellow human being. And unlike with telephone or letter, it is harder to brush them off until they are satisfied with the response.

Although the idea of complaining face to face might seem to be the spontaneous quick resolution method, for the most successful results it is wise to first plan out the attack carefully before approaching a member of staff.

The consumer should be clear in their head what they are unhappy about and how they want the problem resolved. How has the problem inconvenienced them, do they want compensation or an apology?

It is always useful to support the claim by preparing any relevant details such as names of involved parties, times and dates of when the event occurred as well as any evidence that might be appropriate, such as receipts or letters.

A particularly well-prepared complainer will have researched their consumer rights before presenting their complaint. By referencing such legal rights the employee will be aware that they are taking the claim very seriously.

The Right Person to Speak to

Complaining can be a trying and mentally draining process so it is no use wasting time explaining the ins and outs of a complaint to someone who has neither the authority or experience to deal with it. Instead of grabbing the first person wearing a company uniform, it is sensible to find a senior looking member of staff and explain that one has a complaint and ask who would be the best person to speak to about it.

When explaining the complaint it is important to keep it brief and to the point. If the facts are set out clearly and in a logical order the person being spoken to will be able to identify the problem and next course of action more efficiently. Under no circumstances should the complainer resort to raising their voice or showing any other signs of threatening behaviour.

A problem can be very frustrating but getting angry will only make matters worse. The complainer should always try to stay calm, polite and composed. Not only will this help convey the complaint clearly and effectively but it should also invite a more receptive response. The person being addressed will likely not have been personally responsible after all.

The effects of complaining in person are nevertheless limited, largely because they are either made to lower level employees with restricted authority or they are too complex to be sorted out on the spot.

Although sales assistants or customer service staff usually have the power to deal with common complaints swiftly, such as item replacements or refunds, as soon as the problem warrants serious investigation and compensation, it either must be referred to a higher member of staff or needs to be followed up with a formal complaint letter.

Having Evidence When Complaining
Share Your Story, Join the Discussion or Seek Advice..
Good morning in September 2020 I applied for universal credit for an aid to be able to pay the rent at home ..due to the big health problems I had I couldn't work anymore..in January 2022 I received an envelope from universal credit at homein which he says..because I did not submit the correct documentation from home my help stopped and I have to give money back 13600 pounds ... I was called to the job center I submitted all the documents I sent all the original documents to universal credit..I was told that he would check..all time I submitted my sick notes..medical documents..the house documents ..and they say that I did not submit any documents ..I asked them to explain how it isit is possible that all the documents deposited on my account from universal credit will be deleted..please help me..I have nowhere to pay this amount..I am having a very difficult time due to medical problems
Maria - 22-May-22 @ 8:46 AM
I'm annoyed the way Petervardey has been treating about a car I bought from them
Tc - 23-Apr-16 @ 6:01 PM
Title:
(never shown)
Firstname:
(never shown)
Surname:
(never shown)
Email:
(never shown)
Nickname:
(shown)
Comment:
Validate: