Home > In The Workplace > How to Complain About Your Boss 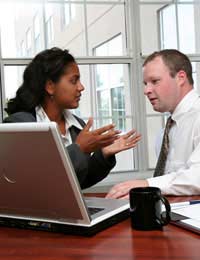 Making a complaint about your boss is risky because unwarranted complaints can jeopardise your working life and even your career, but if your manager is behaving inappropriately then their actions must be confronted.

An exemplary boss is a rare breed. Most employees would be able to find something amiss in the behaviour and abilities of their manager, but are their actions or lack of action serious enough to be grounds for complaint? Making a complaint about a superior is dangerous territory. An ill-considered protest could easily damage your job prospects and make your working life even worse. It is therefore vital that you only complain when you are convinced it is justified.

Reasons for complaint can take various forms from bad management and job ineptitude to more serious issues like discrimination and bullying.

If your boss is simply unfit for their position, such as through being unwilling to take responsibility, shunning new ideas, discouraging initiative or by just being incompetent and out of their depth, then it can be very difficult to justify raising a complaint. Is their incompetence worth the risk of jeopardising your position and being branded a troublemaker or a whinger?

Act with Care and Sensitivity

If you are adamant that action is required then it is important to tread carefully and act with utmost sensitivity. After all, your boss may be unaware of their own limitations and be trying to do what they think is best. It is an unfortunate reality that many managers are not adequately skilled at managing people.

One course of action is to speak to their superior. Rather than demand a formal meeting to vent your complaint, it is wiser to suggest a casual chat where you can calmly explain that you are not being allowed to perform at the best of your abilities in your current role. Rather than blame your boss, explain how your relationship with them is proving frustrating and restrictive. It may also be worth commenting that their behaviour is not only undermining your own performance but also that of the team.

If speaking with their superior either has no effect or is not appropriate then it may be worth attempting to make headway on the ground by adopting a more positive and constructive outlook towards you boss. If you have decided that your boss is incompetent you will likely see everything they do in a bad light - perhaps unfairly. Attempt to build bridges by establishing open and friendly communication both with your boss and within your team, and also by adopting a new enthusiasm for your work.

Is it Directed Towards you?

If you feel your boss’ inappropriate behaviour is directed towards you then it is important to take action, however difficult and risky. Intimidation, bullying, verbal violence, sexual harassment, and discrimination due to age, race, religion, sex or sexuality are all serious breaches of professional conduct and must be confronted.

Does it Warrant Complaint?

Before taking action you first must ascertain whether their behaviour actually constitutes wrongful action. In certain instances, particularly with regards to sexual harassment and discrimination, it may be patently clear but there is also a large grey area between bullying and bad management.

To help establish this it may be worth speaking to colleagues to try to find out whether they have been subjected to or witnessed inappropriate behaviour from your boss.

There are independent official bodies that will help you to ascertain whether you have grounds for complaint and offer appropriate advice. If you belong to a union then your representative should be the first port of call, otherwise you can speak to the Citizens Advice Bureau (CAB) or the Human Rights Commission.

Unfounded verbal complaints will stand little chance of success and so you need to support your claim with evidence. Keep a detailed record of every incident where your boss behaved inappropriately, including the time and date, what they said or did, any witnesses and how it made you feel. Hard evidence such as emails or recorded conversations are even more valuable.

The next course of action is to confront your boss privately and in a calm and polite manner and explain how their behaviour is making you feel, and ask them to stop. If you feel unable to confront them yourself then you could ask a colleague or union representative to do it on your behalf or express your feelings in writing. It is vital that this communication remains impassive and fact-based.

If this proves unsuccessful then you should raise the issue with their superior. Support your claims with your incident notes and if you have secured the support of witnesses then ask them whether you can name them in the meeting.

If this route also fails to end the problem then you will have to resort to making a formal complaint using your company’s grievance procedure.