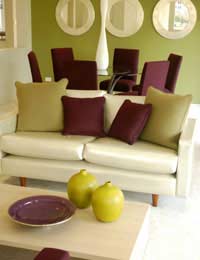 Personal goods and services in the retail sector is one of the main causes of consumer complaint in the UK. In this case study, we highlight one customer’s pursuit of justice.

Joanne and Jason’s faithful old sofa had put in a good many years of service but it was long past its best and the inevitable time came for it to be replaced with a brand new model.

When they found a nice new one in a local shop, kind mother-in-law Leslie stepped in to foot the bill. She had been putting the money aside every month and decided to use it to fund an early Christmas present for her beloved family. The £800 total was paid over four months and at the end of June the sofa duly arrived on the doorstep, much to the great excitement of the household.

However, it wasn’t long before the problems began. The sofa had been delivered on a Thursday and by the Sunday Joanne had already noticed a tear in her posh new suite.

When the back cushions started to come apart, Joanne’s initial response was to turn them around to conceal the damage but it soon became impossible to hide. She likened the fraying on the seam to a zip in the way it simply split apart. This was far from general wear and tear; the sofa was disintegrating before their very eyes.

Leslie and Joanne were convinced they had been sold a substandard product and therefore were entitled to receive a full refund. However, when they contacted the shop, they were only offered a replacement. They were not happy with this offer. The distressing experience had left them very dubious about the quality of the company’s sofas and so they were understandably unwilling to accept any more items from their range in case the same thing happened again.

Instead they took the admirable step of formally rejecting the sofa by sending a letter to the manager by recorded delivery. Unfortunately the letter arrived back a few days later marked as ‘unread’.

Leslie was told by the shop that if she had a problem with the sofa itself then they are not accountable, it is instead the responsibility of the manufacturer. Should she therefore be directing her letters to their management?

According to a professor of consumer law at Glamorgan University, customers should always go directly to the retailer with any complaint about their goods. Leslie was wrong to have been told that she should take the matter up with the manufacturer; her claim is against the shop.

With Leslie assured that the responsibility for the faulty item lay with the shop, she then needed to ascertain whether she was entitled to a full refund or just a replacement. In many similar cases, a replacement would be a fair offer, but when the fault is so bad that it has destroyed any trust you had in the company’s products, you should be entitled to a full refund.

With this consumer knowledge in mind, Leslie and Joanne eventually secured a full refund from the shop as well as an apology for the way in which the matter had been handled.